The park of Frogner Manor was historically smaller and centered on the manor house, and was landscaped as a baroque park in the 18th century by its owner, the later general Hans Jacob Scheel. It was landscaped as a romantic park in the 19th century by then-owner, industrialist Benjamin Wegner. Large parts of the estate were sold to give room for city expansion in the 19th century, and the remaining estate was bought by Christiania municipality in 1896 and made into a public park. It was the site of the 1914 Jubilee Exhibition, and Vigeland’s sculpture arrangement was constructed from the 1920s. In addition to the sculpture park, the manor house and a nearby pavilion, the park also contains Frognerbadet (the Frogner Baths) and Frogner Stadium. The Frogner Pond is found in the centre of the park.

Frogner Park is the largest park in the city and covers 45 hectares;[4] the sculpture installation is the world’s largest sculpture park made by a single artist. Frogner Park is the most popular tourist attraction in Norway, with between 1 and 2 million visitors each year,[5] and is open to the public at all times. Frogner Park and the Vigeland installation (Norwegian: Frognerparken og Vigelandsanlegget) was protected under the Heritage Act on 13 February 2009 as the first park in Norway.

In the middle of the 18th century Hans Jacob Scheel, then owner of the Frogner Manor, laid out a baroque garden adjacent to his new manor house. It was expanded by the people who followed him, starting with Bernt Anker (1746–1805) who bought Frogner in 1790 and expanded the main building. Benjamin Wegner took over the property in 1836 and he transformed the garden into a romantic park around 1840. Later, most of the arable land was sold to private developers.

Around one square kilometer remained when the City of Oslo bought the property in 1896 to secure space for further urban development. The municipal government decided around 1900 to make a park for recreation and sports. Frogner Stadium was opened near the road and the area near the buildings was opened to the public in 1904. Norwegian architect Henrik Bull designed the grounds and some of the buildings erected in Frogner Park for the 1914 Jubilee Exhibition.

The municipal government subsequently decided that Gustav Vigeland’s fountain and all his monuments and statues should be placed in the park. The area was ready for Gustav Vigeland fountain in 1924 and the final plan was released in 1932 by the city-council. Most of the statues depict people engaging in various typically human pursuits, such as running, wrestling, dancing, hugging, holding hands and so on. However, Vigeland occasionally included some statues that are more abstract, including one statue, which shows an adult male, fighting off a horde of babies.

The manor buildings are located in the southern part of the park. The buildings in Danish country house style were built in the 1750s when Hans Jacob Scheel took over the property. After Bernt Anker, who was Norway’s richest man, took over the estate in 1790, the buildings were further extended, and the manor house became one of the most important meeting places of Norwegian high society. They were rebuilt again by the industrialist Benjamin Wegner, who became owner in 1836 and who moved the tower to the main building.

Under Wegner, some surrounding buildings were also built, the pavilion on the nearby height “Utsikten” (The View) and the coachman house at the main gate in front of the manor house. The pavilion was a wedding gift from Wegner to his wife Henriette Seyler, and was moved from Blaafarveværket in the 1830s. It is a classical octagonal round temple with colonnade. The ceiling is a painted replica in miniature of the dome of the Pantheon, Rome. In front of the main buildings is also a sundial built for Wegner. Today, the manor buildings are occupied by Oslo City Museum. Outside the manor buildings, there is also a café opened in 1918 (Frogner Park Café) and a restaurant opened in 1960 (Herregårdskroen, “the Manor House Restaurant”).

The sculpture area in Frogner Park covers 80 acres (320,000 m2) and features 212 bronze and granite sculptures, all designed by Gustav Vigeland. The Bridge was the first part to be opened to the public, in 1940. The Bridge forms a 100 metre (328 ft)-long, 15 metre (49 ft)-wide connection between the Main Gate and the Fountain, lined with 58 sculptures, including one of the park’s more popular statues, Angry Boy (Sinnataggen). Visitors could enjoy the sculptures while most of the park was still under construction. At the end of the bridge lies the Children’s Playground, a collection of eight bronze statues showing children at play.

Originally designed to stand in Eidsvolls plass in front of the Parliament of Norway, the bronze Fountain (Fontenen) is adorned with 60 individual bronze reliefs, and is surrounded by an 1800 square metre black and white granite mosaic.

The Vigeland installation’s granite and wrought iron Main Gate also serves as the eastern entrance to Frogner Park from Kirkeveien. From there an 850 m (2,790 ft) long axis leads west through the Bridge to the Fountain and the Monolith, and ends with the Wheel of Life. The Main Gate consists of five large gates, two small pedestrian gates and two copper-roofed gate houses, both adorned with weather vanes. It was designed in 1926, redesigned in the 1930s and erected in 1942. It was financed by a Norwegian bank.

The Monolith Plateau is a platform in the north of Frogner Park made of steps that houses the Monolith totem itself. 36 figure groups reside on the elevation, representing a “circle of life” theme. Access to the Plateau is via eight wrought iron gates depicting human figures. The gates were designed between 1933 and 1937 and erected shortly after Vigeland died in 1943.

At the highest point in Frogner Park lies the park’s most popular attraction, the Monolith (Monolitten). The name derives from the Latin word monolithus, from the Greek μονόλιθος (monolithos), μόνος meaning “one” or “single” and λίθος “stone”, and in this case is a genuine monolith, being fabricated from one piece of solid stone. Construction of the massive monument began in 1924 when Gustav Vigeland modelled it in clay in his studio in Frogner. The design process took ten months, and it is supposed that Vigeland used sketches drafted in 1919. A model was then cast in plaster.

In the autumn of 1927 a block of granite weighing several hundred tons was delivered to the park from a quarry in Halden. It was erected a year later and a wooden shed was built around it to keep out the elements. Vigeland’s plaster model was erected next to it for reference. Transferring the design began in 1929 and took three masons 14 years to accomplish. The Monolith was first shown to the public at Christmas 1944, and 180,000 people crowded into the wooden shed to get a close look at the creation. The shed was demolished shortly afterwards. The Monolith towers 14.12 metres (46.32 ft) high and is composed of 121 human figures rising towards the sky.

At the end of the installation’s axis there is a sundial, forged in 1930 (there is also an 1830s sundial outside the manor house in the south of the park), and finally the Wheel of Life stone sculpture, carved 1933–1934. The wheel depicts four adults, a child and a baby (the baby and child are on opposite sides).

The latest addition to the park is a statue titled Surprised (Overrasket), originally completed in plaster in 1942 only months before one of the models for the work, Austrian refugee Ruth Maier, was sent to Auschwitz and killed. A bronze cast made in 2002 is now installed in the park. 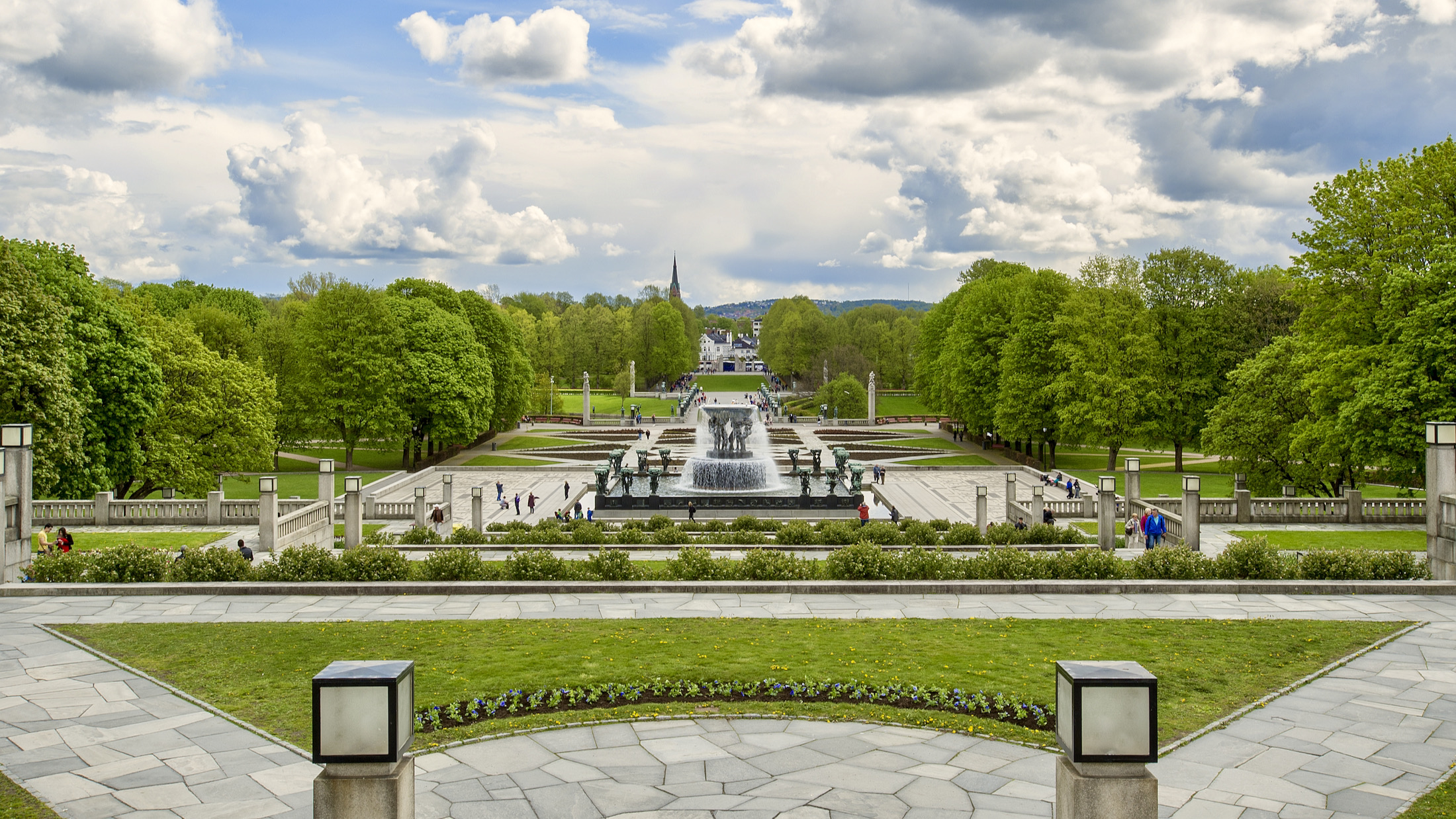 PrevNext
We use cookies on our website to give you the most relevant experience by remembering your preferences and repeat visits.
By clicking “Accept All”, you consent to the use of ALL the cookies. However, you may visit "Cookie Settings" to provide a controlled consent.
Cookie SettingsAccept All
Manage consent