Leon Battista Alberti and the prototype of the Renaissance Villa

Villa Medici was built between 1451 and 1457 for Giovanni, Cosimo Il Vecchio’s second son. The favorite son of Cosimo the Elder, for his lively intelligence and marked inclination towards the arts, can be considered the precursor of Lorenzo the Magnificent, his nephew.
Among his many interests, we highlight that for architecture, testified by numerous contacts with illustrious masters of the time, such as Donatello, Antonio Manetti, Bernardo Rossellino and Leon Battista Alberti, who, in a letter dated around the 1950s and addressed to Giovanni “very friend in Florentia”, he is pleased that the Medici “takes confidence in me”.

Giovanni was a central figure in the construction of this building, starting from the choice of the site, opposed by his father who said he preferred Cafaggiolo as “he sees better than Fiesole, because what he sees is mine”, complaining about the low productivity of the land in relation to high costs of the Villa, and directly followed all the construction phases.

Vasari in Le Lives of 1568 assigns the paternity of the villa to Michelozzo (“And for Giovanni, son of Cosimo de ‘Medici, he made the same [Michelozzo], another magnificent and honored palace, founded from below in the steep hill with great expense but not without great profit, … “) but recent studies have now confirmed the hypothesis of the attribution of the Villa Medici to Leon Battista Alberti (the first and one of the greatest theorists of the modern concept of architecture), together with Bernardo Rossellino and Antonio Manetti (the latter, in particular, for the structural problems of terracing) definitively excluding Michelozzo among the architects.

The reliefs of the villa and garden, the research in the archives (Estimates and Inventories) show great similarities between the Villa Medici and the description of the suburban villa of Alberti in his “De re aedificatoria” (published in 1452) where he indicates how it must be done the Renaissance Villa.

Villa Medici in Fiesole is the first example where the idea of a country residence dissolves from the traditional concept of fortress and castle (still visible in the Medici residences of Trebbio, Cafaggiolo and Careggi, evolving into an independent form. Its privileged relationship with the landscape through the new use of loggias (a traditional Tuscan architectural element) and terraces opens the doors to future Renaissance villas:

The beauty of the building is not based on medieval decorations, but on the simplicity of the structure which harmonizes economy, necessity and beauty and, above all, on the harmony of the geometries. The villa is proportionate in all its parts, both internal and external, according to Albertian concepts that lead back to number, music and geometry

Just as the plan of the Villa follows regular repetitions of geometric rules, so the garden was conceived as originating from the triple overturning of the plant itself (the lemon house is later).

Villa Medici in Fiesole, the first example of a Renaissance Villa, thus becomes the “Muse” for numerous other residences, not only in Florence, which from the end of the 15th century will find inspiration and creative and innovative ideas in it.

Originally the villa was cubic in shape with the loggia to the east with four arches and a terrace to the west (represented in the fresco “Assumption of the Virgin” by Domenico Ghirlandaio – c. 1486-1490 – in Santa Maria Novella in Florence and in Annunciation by Biagio d’Antonio, in the Academy of S. Luca in Rome).

The first extension of the villa was commissioned by Lorenzo the Magnificent only a few decades after the house was built, as evidenced by his Inventory of Goods of 1492: the north strip was added, along the via Vecchia Fiesolana.

Lorenzo the Magnificent inherited Villa Medici in 1469 using it as a summer residence; here he gathered the humanists such as Pico della Mirandola, Marsilio Ficino and Poliziano, who often sang the praises of the place. The villa, just during one of the meetings of the Platonic Academy, was the scene of the conspiracy of the Pazzi family who wanted to kill Lorenzo the Magnificent, but without success.

The Del Sera family bought the property from Cosimo III in 1671 and transformed the west terrace into a loggia, adding a volume band on the upper floor, as it is today.

Lady Margaret Orford, an eccentric heiress sister-in-law of Horace Walpole, a celebrated writer of letters and novels and a lover of architecture, bought the villa in 1772. The noblewoman made some changes to the ‘noble floor’, creating two new rooms in the south corners, closing one of the 4 original arches of the loggia to the east, restoring the symmetry lost with the enlargement by Lorenzo de ‘Medici. The interior decoration follows the taste of the seventeenth century; she is credited with the magnificent Montelupo tiles on the floor and the rare and well-preserved Chinese papers on the walls.

Lady Cutting – Lubbock (mother of the writer Iris Origo) (1911 – 1959) called the architect Cecil Pincent, one of the greatest landscape architects of the time, to design the lower garden with its pergola, and the Chinese bookcase in the villa. 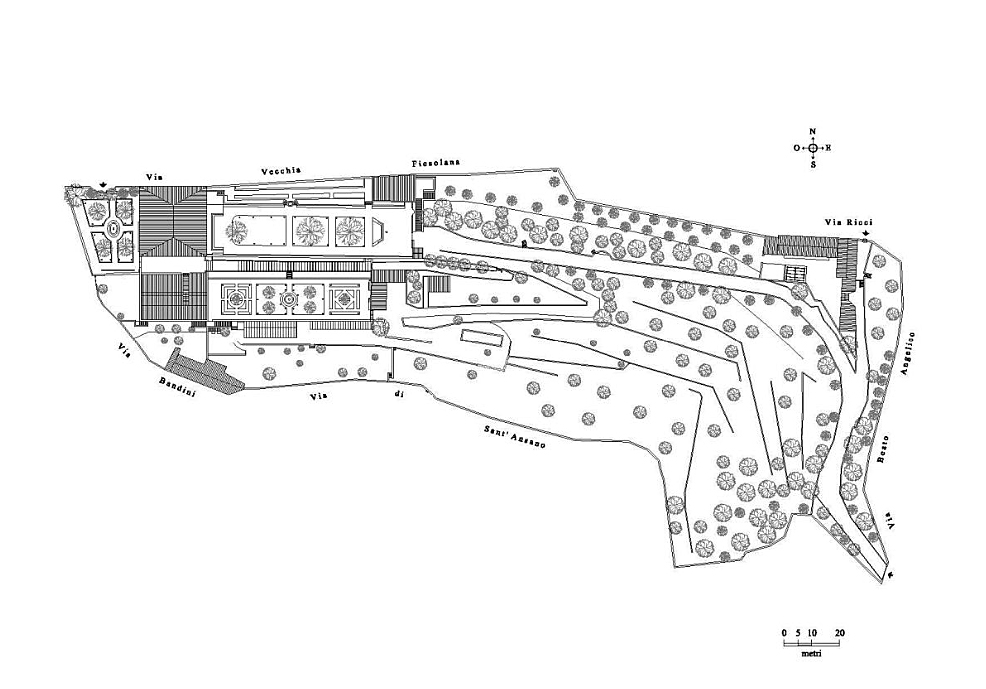 The original entrance to the villa was on the garden to the west, from the Via Vecchia Fiesolana.
The garden to the east, which was for the private use of the villa’s guests, contained flowers and small fruit trees protected from exposure and the walls to the north. The lower terrace was the ‘horto’ with aromatic plants for domestic use.
Giovanni dei Medici was a passionate collector of botany; he was interested in flowers and often exchanged bulbs and rare plants with Italian and European lords.
The cultivation of citrus fruits was also introduced in Fiesole, which became the pride of the Medici gardens. The varieties of oranges and lemons from southern Italy were of great value for their rarity and loved for their properties appreciated in diets and as medicinal ingredients.

There was plenty of water for the exotic plants. Documents from the period describe the extreme attention in planning the property’s water system, which is still partially used today.

In the inventory after the death of Lorenzo Il Magnifico the small wood above the avenue is also mentioned, which at the time had ‘thrush spider’ hunting nets for catching small birds.

In the 70s of the 18th century, Lady Margaret Orford commissioned the architect Paoletti to make the entrance to the east suitable for vehicles and to expand the upper garden with the inclusion of the Limonaia and the Belvedere. The Paulonia trees in the center of the garden’s lawns seem to be from those years.
The works on the avenue continued with Cavaliere Mozzi with the construction of the new communication road between Florence and Fiesole in 1839 and ended under William Spence with the construction of the monumental entrance.

The new avenue establishes the main access to the villa on the east side, no longer to the north from the Via Vecchia Fiesolana and therefore gives the upper garden a different function and importance. At the end of the avenue you can still see the stones of the ancient Etruscan walls.

In 1915 Lady Cutting – Lubboock – Origo commissioned the architects Geoffry Scott and Cecil Pincent, one of the greatest landscape architects of the time, a new layout of the lower gardens, the one to the East, which at the time had uncared for exotic plants flanked by a greenhouse, and that ‘hidden’ to the West on Via Vecchia Fiesolana. Ora parterres simmetrici con siepi di bosso e magnolie centrali riecheggiano giardini Quattrocenteschi, con l’aggiunta di un camminamento ai piedi del grandemuro ombreggiato da una pergola di rose banksiae. At the foot of the pergola, the aromatic plants in the retaining wall at the foot of the pergola have recently been restored as conceived in the fifteenth century.

In June 2013 Villa Medici in Fiesole became part of the UNESCO heritage.